Edit outlook.com contacts in android is a real pain. But in this post I will explain to you have to fix this.

The WordPress.com stats helper monkeys prepared a 2012 annual report for this blog.

The WordPress.com stats helper monkeys prepared a 2011 annual report for this blog.

A San Francisco cable car holds 60 people. This blog was viewed about 3,600 times in 2011. If it were a cable car, it would take about 60 trips to carry that many people.

The roadmap for DevExpress 2011 is launched. In the roadmap you see that Silverlight will get much more attention. WinForms is and old technology that they probably will let go in future releases. Many users write in the comments that they want to see more attention to WinForms then Silverlight because Silverlight is not “Business Ready”. I think that DevExpress has some more inside news in the Roadmap of Microsoft. I also think that Microsoft wont work on new features for WinForms anymore.

So, not so crazy that a company as DevExpress will put that much effort in creating controls for Silverlight and not for WinForms!

If you want to see the roadmap of 2011 for the DevExpress controls, you can find it here. 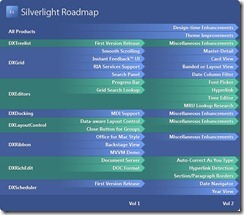 On November 9th 2010 the ASP .NET team released the release candidate of MVC 3. The big change of MVC 3 is the new “Razor” view engine. With this new view engine the syntax of the code is a lot smaller. You now just put an @ on your editor and the intellisense will pick it up.

An other thing that is added in MVC 3 is: partial caching of pages. You can add an attribute above your action in the controller with the right amount of seconds that you want to cache the information. You can even say what the dependent parameter is that the caching will focus on. So if an action is fired and the parametervalue is the same as a previous parametervalue within the specified amount of time, the data will come out of the cache. That way, no database call is required!!!

This is my first WordPress post. What do I think about it? Well, I really don’t know yet. It is a free account with a default theme placed on top of it. Is that what I want? No, but for now it works. The reason why I don’t want a free blog is that I’m in real life a programmer and programmers always want to make his own code.

So what will this blog contain? Well in the beginning not much. I will submit some other blogs that I made earlier but they are in the Dutch language. Maybe some translation tools can make a difference for you guys? Other topics that I will discuss are programming related topics. Hopefully you will find some information that you need for your problem.